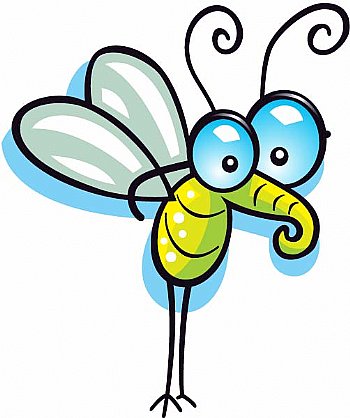 Funny enough, not two days ago, I was telling someone here that I was impressed at the absence of flies and mosquitoes in Mexico. And now here comes this annoying critter to try to ruin it.

It sounds like an entire hive of bees. And I feel this mad urge to just toss things at it until it gets squashed. But I've watched the cartoons
. I know how those things work out. You toss one book, one shoe, a chair, and crash! There goes the people's expensive mirror. Or the light bulb. Or an antique vase. Or the million-dollar chandelier. And the fly would be no worse for wear. I'll spare myself that drama, thankyouverymuch.

In the meantime, there's this fly in my room. Making a most irritating sound; shooting hither and thither as if it owned the place. I know it can't stay here forever. Eventually, it will leave. Or get tired. Or fall asleep. Or something. So I type. Try to ignore it. And carry on with life.

I mean, big deal. This could have happened in Jamaica. But, I wonder, if I were to try to shoo it, would I have to speak in Spanish?

Posted by Ruthibelle at 3:37 PM