(...because Heavy Logix and Jack Mandora just had to go there!)

In all my life, only two comics have ever grabbed and kept my interest. I share the first with you today...

Calvin and Hobbes
You've seen this little mischievous-looking rascal somewhere, I'm sure: the evil glint in his eyes, the impish grin, the dark tilt of the brows, peeing on walls, the sides of cars, store windows, doors... anywhere he can unleash his liquid mischief. You take one look at him, and you think pure evil. 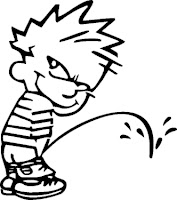 But that's not really true. Calvin's actually adorable. Not because he asks a million and one questions a minute, not because he has a rebellious streak a mile wide and a generation long, not because he has the proverbial 'Arnold' football-head, not because he's a child genius who often deliberately sets out to destroy and annoy; but because, at the end of the day, Calvin is just a 6-year-old trying to figure life out, with the help of his trusty imagina-real stuffed tiger, Hobbes.

Bill Watterson somehow manages to capture in Calvin the mystery of childhood mischief and the unarticulated desires and thoughts of both children and adults. His comics function as social commentary wrapped up in comic relief, and usually leave readers thoughtfully provoked. I think it's really awesome and quite effective. (When I'm a wee bit freer on time, I might do a thesis on just how awesome these comics are!!)

One of Calvin's most endearing characteristics is his attempt to play tough, even though he's all cotton candy inside (you could say he's a miniature version of our favourite Doctor House)... Calvin is quite an interesting, and astoundingly intelligent kid. He asks questions that just blow your mind: literally!

I'd never want to be Calvin's parents, I wouldn't even want to be an aunt or uncle for that kid! But I can probably imagine myself being a friend of the teacher who has to put up with his antics. Those stories of 'all the horrible things Calvin did in school today' would provide guaranteed daily amusement... as do his comics!
Posted by Ruthibelle at 12:00 AM

So where is the second comic, awesome post ruth:)

lol... for years I have been trying to figure out where these guys got that character from only to find out from you exactly where I had seen him. Not much of a comic reader in recent years. Good post.

Ruthibelle, I have two recurring dreams about you. In the first dream, you mentioned me in your blog causing my hits to go through the roof. Won't tell you the second dream, just yet, but it doesn't have anything to do with Peanuts. :-)

I love Calvin he's like the crack version of Dennis the Menace who was straight cocaine. Okay so bloggers aren't always the best when it comes to childish analogies but you smell my drift.

I'm addicted to your tight blog.

Calvin totally reminds me of my youngest boy!!!

Its Just Me - Daring to Dream said...

Oh I love Calvin & Hobbs, just about every book I pick up of theirs has me cracking up at the humor...pretty cool! THanks for sharing.

Never heard someone analyze a comic like that before, I just read it for the laughs! I love Calvin and Hobbes.