Challenge Day 5: The Thoughts I Hid During Haiti's Crisis

But when sun sets

When lights are turned out

Who will be there for us?

Who will be there for Haiti?

I was reading a blog post written by one of my former university lecturers on the plight in Haiti. He was asking a very fundamental and provocative question: did CARICOM arrive in Haiti after the earthquake incident, or were they already there? When I first read the title, I didn't understand fully what he meant. And after reading the entire thing, maybe I still don't. But I was left with this haunting feeling of dread in the pit of my stomach. Something ominous and foreboding. I had questions of my own.

Like this rush to Haiti's assistance. Where in us, in the human continuum of emotions and realisations, did it spring from? Where did it come from? Everybody has been speaking about how the tragedy that hit Haiti has opened in us this small window of light, this flicker of hope that the human race will always rise triumphantly, in times when it is needed most, to prove our sovereignty above lesser creations. To fully utilise those emotions that distinguish us from mere brute beasts and elements of nature. Over the last couple of weeks, it would seem that we all tapped into our deeper selves, and found that supreme, intangible substance that propels people to act in the midst of a crisis. We found in us a treasure and wellspring, they say, of love. 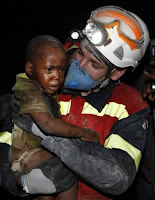 But I'm not certain I accept that. Haiti was a country born from indomitability. They refused to be silenced, refused to be oppressed, fought long and hard for a freedom that has come with many costs just and unjust (not that justice is not a very subjective word dependent on many subtle lines of delineation). In Haiti's history, there has always been evidence of a handing 'down' of this 'supreme emotion'. And not just Haiti, but certain African countries like Somalia, and Asian countries like Indonesia, have felt this supreme emotion at work.

I want to see the aid and relief efforts continue long after the media has gone. I want different organisations to be there, assisting, helping, giving hope, when the rest of the world has turned its eyes from Haiti and looks elsewhere. Only then will I be convinced that this overwhelming outpouring from all directions is not just a prick of guilty conscience, nicely veiled condescension and empathy, sympathy birthed out of pity. But is actually that supreme emotion that looks at Haiti as a pearl in need of care long after the rewards of doing so have gone. Especially from CARICOM and Caribbean nations. Haiti has known this feeling before. They have already walked this road with suitors in their choicest robes, tempting them, caressing and cajoling them with their finest wares - in the limelight, before the crowd. But when the sun sets, and when the lights are turned out, who will be there for Haiti? Who will still see her black face and exalt her as a cherub of great price?? Who will value her then? Is this outpouring just pity? Or is it love? And don't we need the latter?
Posted by Ruthibelle at 6:08 AM