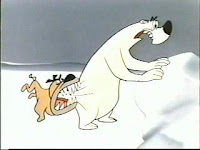 One plus one equals two. Because when you take one thing, and add it to another thing, you end up with two things. It stands to reason. It makes sense. It FOLLOWS.

When you use a football field as the venue for a concert, and there is rain, and a huge crowd of stomping, jumping, dancing people, you should expect the field to be ruined by the end of the seven-day event. The grass will go missing, not because some mysterious stranger took 500 truckloads of it (like they did with the sand off one unfortunate gentleman's beachfront property two years ago), but because the stomping, jumping, dancing people stomped down the grass, jumped on the mud, and danced around in it just enough to spread it over a noticeable area and kill off all of the grass ... It doesn't take a commission of enquiry or any serious investigation to figure that out. It's common sense. It FOLLOWS.

When you carry in an official inspection team to survey that field 11 days after the concert, five days before an international sporting meet is expected to be held using that same stomped-on, jumped-on, danced-on, ruined field, you should expect them to declare it unfit for games. Not because they're biased and have a vendetta against your country. Not because the contractor 'faked' a field to show you (and even if he did, what did you expect him to do? Turn water to wine??). But because the field is ruined. And you cannot use a ruined field to host a serious international event. You cannot allow a player to fall on his backside in sun-dried, caked up mud instead of on that cushiony sea of lush green grass that is supposed to be there to prtect his derriere. The man will bruise! And the hurtful part for him would be that the lush green cushion for his backside was probably there before YOU decided to host a seven-day concert of stomping, jumping and dancing it to death, knowing full well that you were jeopardising the usability of the field thereafter, and thereby increasing the vulnerability of the poor man's netherend, not to mention hanging your country's reputation out to dry! It doesn't take a commission of enquiry or any serious investigation to figure that out. It's common sense. It FOLLOWS.

So when I hear Sports Minister Olivia Grange talking about conducting an investigation to determine why the Trelawny Multipurpose Stadium football field, which was used to host the Jamaica Jazz & Blues Festival over a seven-day period, is now a disgraceful, grassless mess, I have to seriously wonder when common sense became so ... uncommon. Of course the field was declared unfit to host the 2011 CONCACAF Under-17 World Cup Qualifying Tournament! It doesn't take a commission of enquiry or any serious investigation to figure that out. It's common sense. It FOLLOWS.

And the worst part? To quote Jamaica Football Federation general secretary, Horace Reid, "Our reputation has been tarnished as a country and as a football federation. Our reputation with CONCACAF has been tarnished and there will be repercussions down the road." Why were no alternate preparations made, especially considering the high probability of the field being damaged after a seven-day, continuous beat-down? In this instance, I feel more sympathy for the football field. It exits, stage left, with a sore, back-and-blue, bruised backside ... and Jamaica's reputation follows closely behind (no pun intended).

See the news story from:
Observer
Gleaner
RJR
Posted by Ruthibelle at 6:20 PM