Riddle 4 U: A single girl can't look for this when she's looking for this... (one word).
I've come to the conclusion that the world is full of nut jobs and weirdos and freaks and freakish accidents. If you don't beleive me, then see for yourself... 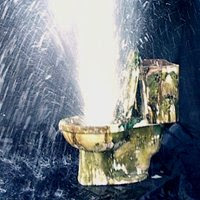 Hailstones blasted, and I mean cannon-balled, a man off his toilet in Austria. Apparently hailstones the size of golf-balls just started shooting out of the toilet, popping up like pop-corn, till an "avalanche of ice quickly filled the toilet, then the entire flat, and eventually the entire building." Hear this: "I grabbed a board and put it over the toilet, but the pressure was so great, I ended up sitting on the board as the hail flowed through the flat and down the stairs." LMAO! Hail-surfing anybody? Austrian people will have to take out insurance against hail shooting up their assets! Too bad there's no video footage for this story :( (Full story here).

Talula Hula
Some crazy couple named their kid 'Talula Does the Hula from Hawaii'. A judge had to officially change the poor kid's name to something decent and sensible and, well, normal. Why would you name your kid 'Talula Does The Hula?' And how does that even work? Is the first name 'Talula', and the last name 'Does the Hula'? Or is it like a Talula-Does-the-Hula Watson? I can think of a million ways that could come back to haunt the poor girl, especially in high school and college. Thank God for that judge! I say if you want to give someone a ridiculous name, make it your own! (Full story here)

Two friends set fire to their friend's 'groin' after a drinking spree... and got sentenced to prison for it, because their friend got second degree burns from the 'prank'! One of teh guys actually got 2 years jail time. Can you imagine when he's in prison, and the guys are talking about what they did to get there?
Random 'Real' Criminal: I killed my mother-in-law. She was annoying me something fierce. (Turns to crotch fire guy) What'd you do?
Crotch-Fire Guy: Oh, I set fire to my friend's crotch...
Tsk tsk tsk! Only in America, I tell you, ONly in the US of A...

Riddle Answer: A Husband!! A single girl can't look for a husband when she's looking for a husband... get it?
Posted by Ruthibelle at 8:18 AM

almost got the riddle. its true though.

hula's parents were ridiculous and silly

the friends who burned up that guy's crotch deserve to do time... maiming his manhood like that, lol.