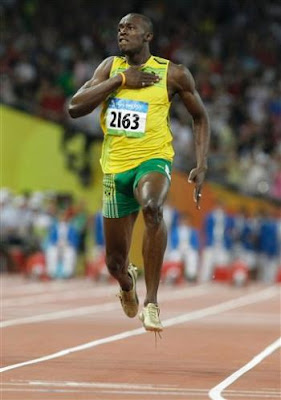 Jamaica held its breath. Trinidad refused to breathe. The entire Caribbean froze in anticipation, the taste of victory thick on their tongues, a sweet scent wafting up in their nostrils. The second before the gun, the world was absolutely still. Even the birds refused to sing. Something great was about to happen. No-one made a sound. Then the gun, and they were off.

It only took 9.69 seconds for the world to find its voice again. Like Lightning, Usain Bolt struck and unsettled China's Bird's Nest, defying history's boundaries and shattering international, regional and national records, and giving Jamaica another reason to smile.

Words cannot describe the euphoria emanating from Beijing, China, since Usain ‘Lightning’ Bolt secured his place in history- at a delicate 21- as the first Jamaican to win the Olympic 100m gold, and the world’s fastest man. Caribbean sunshine flooded China’s Bird’s Nest when Trinidad’s Tyrone Thompson stood his own ground and took silver in the event, with Jamaica’s Asafa Powell and Michael Frater copping fifth and sixth places respectively, and Churandy Martina, from the Netherland Antilles, coming a close fourth. The dense smog must have lifted by at least a couple of inches, allowing a little bit of Caribbean light, laughter and even tears into the eyes and hearts of the spectators who witnessed this phenomenal, unmatchable moment in time.

In just under 10 short seconds, an unprecedented 6 Caribbean men participated in an Olympic 100m final. Carnival could never rival the effects of all 6 Caribbean nations caught up in celebration at once. Pot covers came out, whistles were exhausted, voices grew hoarse from strained overuse. The region climaxed in the ecstasy of its grandest accomplishment yet – proving that the Caribbean is indeed the world’s sprint capital, and that Jamaicans are a ‘little but tallawah’ people.
Posted by Ruthibelle at 8:11 AM

Excellent post Ruthibelle!Indeed," we little but tallawah." Kudos to Lightning Bolt on his awesome performance in winning the Olympic 100m gold medal in the awesome time of 9.69 seconds while coasting home to the tape/finish.But Ruthibelle, guess what, you/we have not seen anything yet,wait until Lightning Bolt doubles in winning the 200m gold medal,possibly in another world record performance.Quite frankly,it will be total hullaballoo,jubilation and excitement.Most assuredly, Jamaica and the region can be extremely proud of their performances in seeing/witnessing an unprecedented six finalists from the Caribbean.PROFOUND and AWESOME.Big up Mr.Usain Bolt,the BLACK GREEN and GOLD is extremely proud of its awesome and incredible son.

girrrrl, this post deserve a gold medal like Mr. Lightning Bolt himself. EAR right too. Wait til Bolt gets gold in teh 200 - then we will see things!!

*takes a bow*
You guys are right, I was really rooting for Asafa but Bolt stole the show-really lit up the place, lol! Did anybody notice that he was cruising at the end? Even hit his chest before he crosed the finsh line?? The boy have a wholeap more left in him!!! I shudder to think how fast he will be in a matter of months... unstoppable!!

Girl, where have you been hiding? Excellent, excellent article. It belongs on the front page of the Gleaner and the Observer. Well done!!

Well I sent it to them, (and several others). Not sure if they will publish it, but we'll see...

He certainly delivered an electrifying performance! He was so damn fast he had time to slow down and celebrate his victory before the race ended! Do I smell more gold?

I smell wholeap more bredren! It's about time though if you ask me. *Evil voice* Take that world, cringe in fear before the speed-tastic Usain Bolt, mwahaha!!

lol @ 'little but tallawah’ my Granny says that all the time!!

Bolt did extremely well! I love to see Jamaicans rip it up!! Dude is fierce!!!

Great post, congrats Mr. Bolt! It’s just a shame that Asafa didn’t even medal, confirming his reputation as “big meet” choker. So while we celebrate the rise of Mr. Bolt we may also be saying farewell to Mr. Powell.