Veronica To The Flippin' Weeerl (& Other Olympics Musings)

Too many things to talk about today:
First, big ups to the 2-time Olympics 200m gold medallist: Veronica Campbell-Brown. She never disappoints, and while she not into showBOLTing (lol, ma friend came up with that one, hadta use it), we still love her: nuff nuff nuff respect!! And congrats Kerron Stewart, you get silver and bronze in your first Olympics meet... girl yuh laaahge!! 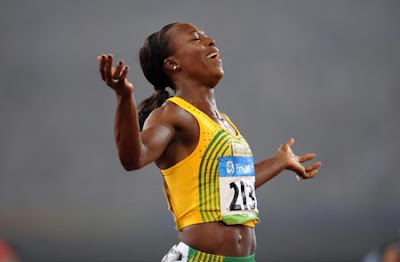 On to relays: what is going down with the great US of A?? How them manage to lose the batons in both 4x1 races?? I was actually disappointed cause I wanted the finals to be the battle of the bests. Was it a case of too much pressure/too much effort, or was it just nerves? Or lack of practise? One'a my friends say is the goozum* that they trying to work on we backfire on them, LMAO. (*Goozum - Jamaican word for obeah, witchcraft). Ah well, such is life and life is such, and when Jamaica gets the gold, I sure as hell won't cry for America. But still, it look like somebody work summ'n on America, cause they just keep messing up...

And finally, one of my friends did a post on the sense of unity that has been sweeping over Jamaica since the Olympics (quote from his blog here):

what irks me is this false sense of unity, which has arisen as if the political and class divisions that separate us won't return when the Olympic Games are over.

Of course, I sent him a scathing response, cause I thought what he was saying was just cynical, pessimistic bull. But when you really think about it, after the Olympics, then what? We go back to killing each other every day like is a national hobby? The Olympics have inspired literal, tangible and visible lightness in this country's atmosphere. The sky seems clearer and twice as blue, birds' songs carry an intensified chiro of joy, bright smiles meet you everywhere you go... random strangers grinning off them 42 with each other like them is long-time friends. The entire nation is eclipsed in a happy, surreal euphoria: a heady, intoxicating joy/hope has washed over Jamaicans. Such a heavenly feeling caused by just five Olympic golds in three days... Like GC said, now if only somebody could do something about the crime...
Posted by Ruthibelle at 7:55 AM

no goozum, a karma. yu notice who mess it up? torri edwards, who had the revelation that she false started after neither she nor any of her teammates won a medal? mi disappointed too, cause i wanted us to kick their sorry cans, but as you said, ig all things are equal and we sweep the relays, i won't be crying for america. i'll be too busy trying to nuh linga!

lol, J-girl, i can imagine you doing the nuh-linga... lmao

yea its a shame that the euphoric feelings wont really change some of the sad realities.
maybe the government will wise up and realize that its people have potential, not only in athletics but in everything and they should put more money into them

Amen to that Jdid!!